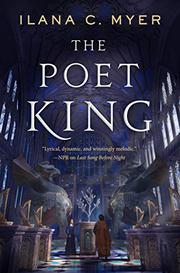 The common thread of Myer's previous two books—don’t bargain with dangerous extradimensional magical beings—expresses itself in new and surprising ways in this conclusion to a trilogy melding music, enchantment, and dark ambition.

Having employed such bargains to take over the Poets’ Academy and foment civil war in the distant land of Kahishi (Fire Dance, 2017, etc.), Archmaster Elissan Diar now uses his power to take the throne of Eivar. But his magics have opened a portal for the White Queen, an icy, bloody being who has her own ideas about what Diar is entitled to. Peace and stability in both Kahishi and Eivar depend on former Court Poet Lin Amaristoth; Syme Oleir, a young man possessed and driven insane by an Ifreet; and two previously ignored and despised Academy students: Julien Imara, a shy young woman unexpectedly gifted with prophetic magic, and Dorn Arrin, whose unwilling part in a sacrificial ritual could mean his doom. And somewhere in the mix there is Etherell Lyr, a beautiful man of uncertain loyalties and Dorn’s decidedly unrequited love, whose tortured past as a sexual abuse victim has left him mercurial, vengeful, and sociopathic. These fully drawn characters negotiate complicated choices in a world that intriguingly intermingles Middle Eastern and Celtic folklore as well as a fantasy equivalent of the Jewish Diaspora. Myer delicately threads a steady path through a complex, ever shifting plot while maintaining a consistent throughline of theme that condemns the heedless and selfish choices of the powerful and pointedly underscores the folly of ignoring the quiet, seemingly insignificant people whose unexplored depths and considerable strengths might be poised to strike against those very same people at the top.