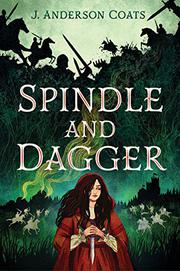 An unruly, bloodthirsty band of warriors rampages through 12th-century Wales.

They are led by the murderous Owain ap Cadwgan, who attempts to vanquish the equally warlike Norman invaders headed by Gerald of Windsor. The narrator, Owain’s girlfriend, Elen, saves her skin by convincing him that he cannot be harmed because he is protected by her namesake, Saint Elen. Elen is dragged along, mostly against her will, with the war band. She has PTSD from an earlier incident that is revealed in brief flashbacks to have been the death of her baby sister. The story reaches a climax when Owain abducts Nest, his enemy’s wife, and her children. Owain’s aggressive action gets him in trouble with his father, Cadwgan, and Owain is banished to Ireland with Elen in tow. Elen is heartbroken to be separated from Nest’s children, with whom she has formed a close bond. Although at times a little hard to follow, this gritty narrative brings a little-known period in history to life. A historical note gives the context and sources for this story, which is loosely based on the “Chronicle of the Princes,” written some time after the events it relates. Frontmatter includes a chart of the Welsh royal houses, a map of Wales in 1109-1110, and a pronunciation guide, useful given the inclusion of some Welsh words, presented in italics in the text.

Dramatic and intense; not for the fainthearted. (Historical fiction. 12-16)