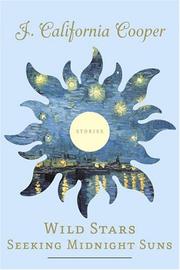 Intimately told contemporary morality tales about the search for love and material success.

Through the voice of her engaging unnamed narrator—a wry, pretty much all-knowing observer who is mostly content to sit in the background and watch foolishness reach its inevitable conclusion—Cooper (Some People, Some Other Place, 2004, etc.) presents nine stories about young black women: Some make unfortunate choices; some make shrewd decisions; some read books and excel at school; some daydream of dreamboats with whom they sail away to the land of milk and honey. In all the tales, character is destiny, and the most fearsome enemy (vanity, greed, sloth) is found within. In “The Eye of the Beholder,” Lily Bea, a homely child with a bright spirit, is married off by her selfish mama to a nasty old man who owns a dry-cleaning business; only her love of books saves her from a life of slavish work and emotional abuse. Several stories follow a fabulist’s schema: In “As Time Goes By,” hard-working Willa Ways earns a Ph.D. and achieves acclaim in a distinguished career; her lazy sister, Futila Ways, uses her good looks to snare a husband, but winds up in a loveless marriage and an empty life. Other tales skewer the narcissism of successful young professionals who think so highly of themselves that they let love pass them by. What unifies and deepens these stories is the impish, ever-forgiving but gently judgmental narrator who doesn’t hold herself above the all-too-human impulse to share some really good gossip, as in “The Party,” a story about an evening at a nightclub that turns into an after-hours orgy. The morning after, the narrator winds up treating the participants at the family clinic where she works, doling out penicillin because someone reported a case of STD.

Warm-hearted, earthy and sly. As enjoyable as a favorite relative who has all the dirt on the other family members in the room.

LIFE IS SHORT BUT WIDE
by J. California Cooper
Fiction

SOME PEOPLE, SOME OTHER PLACE
by J. California Cooper
Fiction

THE FUTURE HAS A PAST
by J. California Cooper
Fiction

THE WAKE OF THE WIND
by J. California Cooper
Fiction

SOME LOVE, SOME PAIN, SOMETIME
by J. California Cooper
Fiction

IN SEARCH OF SATISFACTION
by J. California Cooper
Newsletter sign-up