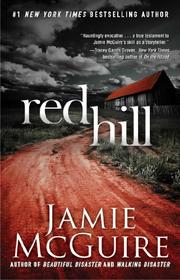 Far-fetched coincidences, encounters with reanimated cadavers and a smorgasbord of emotions, including—what else?—love, connect a group of people who flee a zombie apocalypse in McGuire’s (Walking Disaster, 2013, etc.) novel.

Someone should have paid closer attention to media reports from Europe about a viral outbreak and a scientist’s experiments with the dead since, suddenly, hungry zombies are roaming Kansas, and even Toto’s not safe. As people jump in their cars and try to escape the voracious biters, Scarlet, a hospital radiologist, desperately risks life and limb to reach her daughters, who are spending the weekend with her ex-husband in a neighboring town closely guarded by trigger-happy soldiers and crawling with the undead. Scarlet finds the house empty, and so she spray-paints a message on the walls so the girls will know where to go: Red Hill Ranch, a remote spread more than a 90-minute drive away. Blindly trusting that her ex-husband (who up until this point hasn’t been the best father) will take care of the girls, Scarlet vamooses. After a brief stop in his brother-in-law’s small town, Nathan, another parent, decides to seek a rural place to wait out the crisis with his young daughter, Zoe, who’s prone to acting out at times but seems all too aware of what’s going on around them. Meanwhile, two teenage sisters and their boyfriends pick up a soldier and speed toward their destiny in a very crowded VW bug. Dodging danger along the way, including close encounters with the living dead, Scarlet, Nathan and Miranda (one of the sisters) alternately relate the story from their own points of view and flesh out the main characters for readers. Until their lives converge, the story possesses adequate bite and horror to entertain the casual reader; however, almost immediately after the characters assemble at Red Hill, the simple escape-from-zombies-or-become-mincemeat premise slows to a shuffle. The plot disintegrates into monotonous repetition as characters brave losses, deal with an ominous guest, bash in more zombie heads, fall in love, grieve, fall in love again and wax philosophical about the future.

By the time the novel lurches to the end, readers may find themselves pulling for the zombies.