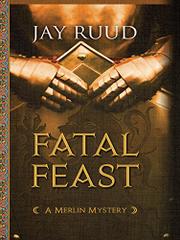 The death of Sir Patrise comes as a complete surprise to the knights who have gathered for the feast Queen Guinevere has laid out. Who would wish to harm a foreign visitor, especially when the Irish have been so recently welcomed to Logres, the land of King Arthur’s rule? But it appears that Sir Patrise has been killed by someone at the feast, and his cousin, Sir Mador, demands justice from the person he suspects as the murderer: Arthur’s queen. Guinevere is shocked and wishes she could be defended by her husband. She knows, however, that his attachment to her would not warrant that level of commitment in spite of their many years of marriage. With her usual defender, Sir Lancelot, out of the country, she has none to rely on except her loyal page, Gildas. Though Arthur will not fight on Guinevere’s behalf, he entreats Gildas to seek out Merlin so that the two of them may determine the identity of the true murderer while the queen awaits trial. Merlin has been sequestered in a cave, driven near madness by his obsession with Nimue, Damsel of the Lake, but he reluctantly joins Gildas in the quest to absolve Guinevere. Struggling to work together, the two wade through a People magazine’s worth of court gossip, attached to the names of knights so numerous, noble and nondescript that the real problem may be distinguishing one from another.

Strong in neither historical intrigue nor investigative suspense, Ruud’s debut is at its best in providing its characters with sassy if questionably accurate personalities.

NO LAW IN THE LAND
by Michael Jecks
Newsletter sign-up