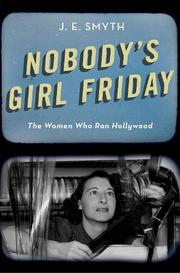 A history of women who held prominent positions in Hollywood from 1930 to 1950.

In a fresh, lively examination of women’s places in film history, Smyth (History/Univ. of Warwick; Fred Zinnemann and the Cinema of Resistance, 2015, etc.) has uncovered abundant evidence for their significant roles as producers, writers, agents, editors, designers, union leaders, and, of course, performers. Besides focusing on a few well-known actresses—e.g., Bette Davis and Katharine Hepburn—the author brings to light scores of women whom many film critics and historians have relegated to “obscure footnotes.” By focusing on “director-auteurs and glamorous stars,” these critics fail to account for the diverse, collaborative nature of film production. “Nearly two dozen women worked as producers or associate producers,” writes Smyth, and more than 60 as film editors. They served on executive committees of the Screen Writers Guild (where they made up a quarter of the membership), the Academy’s Board of Governors, and the Women’s Press Club, among other organizations. The author identifies many women whose influence was well-known by their contemporaries: in 1938, newspaper columnist Ida Koverman, feisty assistant to Louis B. Mayer at MGM, was “one of the most powerful personages in the entire motion picture industry; when she pulls the strings, world-famous stars dance, like puppets.” In 1942, prolific screenwriter Mary C. McCall Jr. was elected as president of the Screen Writers Guild, where she demonstrated “a take-no-prisoners commitment to collective bargaining.” Fired from Warner Bros., where she was one of only two women writers, she happily moved to Columbia Pictures, where Harry Cohn eagerly promoted women’s careers “at all levels of production.” Although the infamous “casting couch” and sexist attitudes posed challenges, the women Smyth profiles “proved that Hollywood was not a man’s world and that hard work, mental toughness, and professionalism were not inherently masculine.” The studio system offered “a negotiable artistic hierarchy” in which women’s perspectives were welcomed and rewarded. Even “classic patriarchs” like Sam Goldwyn admitted “Women Rule Hollywood.”

An exuberant celebration of empowered women.

THE WAY WE NEVER WERE
by Stephanie Coontz
Nonfiction

THE LADY FROM THE BLACK LAGOON
by Mallory O'Meara
Nonfiction