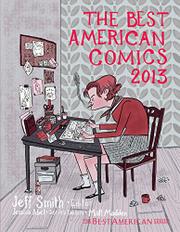 The eighth volume of the series collects 30 examples of graphic storytelling—either in whole or as excerpts—from graphic novels, pamphlet comics, newspapers, magazines, minicomics and Web comics.

Editor Smith (RASL, 2012, etc.) explains his selection criteria as “originality; grasp of the tools and syntax of panel-to-panel progression; and most important, if the thing surprised me, it was in.” In terms of surprises, Michael Kupperman’s “Scary Bathtub Stories” offers a hilariously absurdist, 1950s-style warning about the dangers of bathtubs, such as their ability to expose bathers to Lovecraft-ian beasties and horrific demises (“I can feel its eye-mouth on my genitals!!”). Wry wit and simple lines are on fine display in James Kochalka’s excerpts from American Elf, his semiautobiographical, slice-of-life comic strip featuring the artist and his family (and a cat who scratched Kochalka’s face “just because I tried to play him as a harmonica!”). The collection offers strong personal, emotional stories, the most striking being Derf Backderf’s “The Strange Boy,” excerpted from his fascinating memoir-cum–investigative journalism about his adolescent friendship with Jeffrey Dahmer. Backderf presents a sympathetic though creepy portrait of the future serial killer, made all the more perverse when viewed through the cartoonish, R. Crumb/Mad Magazine lens of his art. Another standout is Eleanor Davis’ “Nita Goes Home,” a near-future homecoming that ingeniously nails its science-fiction tropes, highlighted by a scene in which two sisters mourn their father’s passing, clinging to each other and bawling while the suits they wear for protection against a degraded environment render their faces as expressionless bedsheet ghosts. The best panel work comes in Sam Alden’s pulse-pounding “Turn Back,” Sammy Harkham’s fine-lined grotesquerie “A Husband and a Wife,” Joseph Lambert’s chalky depiction of a young Hellen Keller’s world in “Discipline” and the percussive pulp punches of Tony Puryear’s “Concrete Park: (Chapter 1).” While all the stories are executed crisply, some feel a bit pat (Vanessa Davis’ “In the Rough”) or uninspired (Faith Erin Hicks’ “Raiders”) or strain for cleverness (Grant Snider’s “Four Comics”).

At its best, a gorgeous, glorious inferno of imagination; at its worst, great art.

OUT ON THE WIRE
by Jessica Abel
Fiction