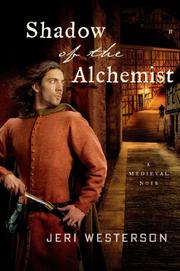 SHADOW OF THE ALCHEMIST

Politics and alchemy combine in a strange and dangerous case for the Tracker.

The time is 1387. King Richard’s excessively generous treatment of his favorites is causing much concern among his nobles. Crispin Guest is a Knight of the Realm who lost his title and lands for engaging in a treasonous plot but kept his head and went on to earn a living as the Tracker, a detective. His latest client is Nicholas Flamel, a French alchemist whose apprentice was murdered and whose wife was kidnapped by an unknown enemy who wants the Philosopher’s Stone Flamel created. In addition, Guest has been visited by Henry of Derby, whose father, the Duke of Lancaster, is Guest’s former patron. Henry, who’s involved in a group trying to get the monarch to behave as he ought, seems strangely interested in learning from Guest’s detecting skills. Meanwhile, Guest and his apprentice, Jack, are getting unwanted but useful help from Flamel’s waiflike servant, a deaf young woman who seduces Guest. They soon realize that someone is playing games with them, leaving clues all over London they must find and interpret if they are ever to recover Flamel’s wife. Guest keeps running into Henry, another alchemist and a fiery preacher, all of whom seem to have some connection with his case, which becomes ever more dangerous in many different ways as Guest doggedly pursues a ruthless and cunning killer.

THE SILENCE OF STONES
by Jeri Westerson

THE DRAGON OF HANDALE
by Cassandra Clark
Indie

Orphans, Assassins and the Existential Eggplant
by J.T. Gillett
Mystery

THE HERALD OF HELL
by Paul Doherty
Mystery