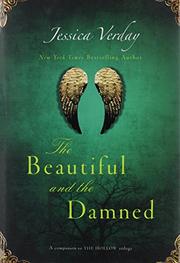 THE BEAUTIFUL AND THE DAMNED

Despite its title, this companion to Verday’s Hollow trilogy comes across more as a thriller than a soap opera.

While some knowledge of the previous series certainly would help, new readers will find enough background information to glean the basics. Cyn tries not to sin, but she can’t help it. She’s an Echo, a human who serves as a host for a series of souls that inhabit her body and sometimes take over to do murder, or so Cyn believes. Enter Avian, the 13th Revenant, shunned by both demonic and angelic Revenants. (Revenants are otherworldly figures that help the living “cross over.”) Avian spends his time dispatching supernatural baddies, the protégé of benevolent Father Montgomery. Meanwhile, Cyn, working as a waitress, tries to avoid Declan, the brother of her former boyfriend, Hunter, whom Cyn believes she murdered in one of her blackouts. Avian balances his emotions and his duty to fight supernatural evil, even as he finds himself falling for Cyn. The supernatural lore lies thick on the ground, but the author keeps the narrative flowing nicely. Cyn’s all-night waitress job in the dumpy little diner adds some welcome realism amid the paranormal elements.

EVERY OTHER DAY
by Jennifer Lynn Barnes
Children