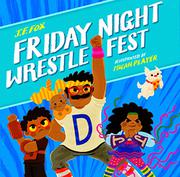 A loving family masquerading as pro wrestlers rings in the weekend with a nocturnal cuddle-clash.

If love is a battlefield, bedtime surely qualifies as siege warfare—or at least a good scrap. Fox reimagines this household ritual through a new angle, with the whole family clad in homemade wrestling attire duking it out in a scarf-roped, blanket-matted squared circle in the living room. At the opening bell, Peanut Brother and sis Jellyfish no-sell Dangerous Daddoo’s attempt to impose curfew. Player’s vivacious palette and dynamic brush strokes dominate each page, and the larger-than-life characters’ minimalist facial features ensure maximum expressiveness. The in-ring action is fast-paced, with Fox’s punchy text sprawling over spreads and emphatically discouraging silent reading. Be warned: This shout-aloud story demands the best from any caregiver’s inner MC, and the bright, pun-laden, affection-filled narrative is sure to inspire emulation. Though Daddoo is initially caught off guard by a “WHEM BAM JAM SLAM-WICH,” he quickly turns the match into a literal slobberknocker by unleashing his patented “CODFISH KISSES.” Things are looking desperate for the Tag Team Twins until Mama-Rama gets home and turns on Daddoo, catching him in a classic “PARENT TRAP.” In the end, it’s Big Bald Baby who brings down the house with a “DIAPER OF DOOM,” and, after singing, brushing, flushing, and polishing off a book, the kids finally go down for the count. All family members have dark, curly hair and light-brown skin.

A boisterous blow off sure to tucker listeners out before they’re tucked in. (Picture book. 3-7)

VOTE FOR OUR FUTURE!
by Margaret McNamara
Children

MIGHTY MEG AND THE MAGICAL RING
by Sammy Griffin
Children