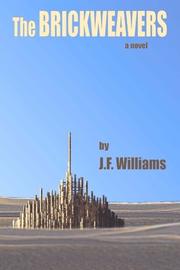 In the kingdom of Thujwa, exalted craftsmen build with elemental forces of energy—but there are those who would use this technique, “brickweaving,” to create weapons of mass destruction.

In dignified, formal language hearkening back to 19th-century fantasy masters like Verne and Wells, Williams describes what seems to be a primitive, pre-industrial society. But appearances can be deceiving. The desert-bounded city-state of Thujwa is home to various guilds of craftsmen (it’s a measure of Williams’ dry humor that the most hapless and useless guild is devoted to medicine). Among these artisan-aristocrats, the most crucial to society’s functioning are “brickweavers,” adept at manipulating gravitational and magnetic force. In most prosaic functions, brickweavers build virtually impregnable brick walls, spill-defying basins and amazing soaring (or floating) towers that make up the skyline. But brickweaving energy can also propel vehicles, hold living matter in stasis or—using immense forces of attraction, compression and repulsion—create WMDs that destroy with terrible finality. To outlying tribes, Thujwa is still remembered from ancient days as a cruel conqueror and enslaver. When the brickweaving guild’s leadership consults the archives of the distant past to reconstruct a few of the brickwoven war machines (for ominously vague reasons), principled brickweaver Jeppo and his raw apprentice Kulkulla—a washout from the medical guild—learn belatedly about the secret project and realize that for the sake of society they must take steps against it. Williams’ unhurried pace may make H. Rider Haggard seem like LucasFilm by comparison, but his characterizations are offbeat, mature and intelligent—the aged Jeppo and his cherished, ailing wife are an especially fetching romantic duo in these oversexed vampire- and werewolf-ridden times. The alternate world Williams portrays is a compelling one, and the brickweaving concept does eventually inspire subtle tremors of awe and wonder. Wisely, Williams doesn’t waste page space laying out minutiae, terminology and mechanisms. Whether brickweaving be art, magic, science, mathematics, geomancy or any and all of the above is a question that remains ambiguous—nicely so for readers pulled, as if by gravity, into this well-built narrative.

THE MARTIAN WAY AND OTHER STORIES
by Isaac Asimov
Fiction