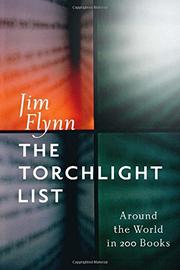 Around the World in 200 Books
by Jim Flynn
BUY NOW FROM
AMAZON
BARNES & NOBLE
LOCAL BOOKSELLER
GET WEEKLY BOOK RECOMMENDATIONS:

A slim volume that gives suggestions of 200 books that will take readers through “the magic realm of literature,” yet it offers too little magic and, surprisingly, finds too little of it in the recommended books.

Flynn (Emeritus, Politics/Univ. of Otago; Where Have All the Liberals Gone?: Race, Class, and Ideals in America, 2008, etc.) writes that “it never occurred to me not to read for pleasure,” lamenting the fact that students and academics alike seem to read out of a sense of duty, narrowly rather than widely, missing not only the education that literature offers, but the joy. So far, so good, until we get to the actual recommendations, most of the books summarized in a paragraph or less, many of them damned with faint praise. Flynn claims that Saul Bellow displays “pretension and the irritating need of the author to show how well-educated he is” and that William Faulkner’s “style is too convoluted for my taste.” If Flynn is less than impressed with literature that is a little too literary, he generally ignores anything experimental or postmodern, novels that are more about the writing of the novel than an engagement with the world. He loves Thornton Wilder. He writes that “E.L. Doctorow is a great novelist,” and that “all of [Philip] Roth’s novels are good.” Flynn also highly recommends the later Tom Wolfe books, which have been so widely disparaged, and he rarely goes very deep in his analysis. So, while the impulse underlying this book is solid—to get more people to read more—those who are already widely read will find much of this patronizing or infuriating, while those who hardly read at all aren’t likely to be inspired by a series of tepid summaries.

An idiosyncratic (at best) celebration of the joy of reading.

HOW TO READ ANY WHY
by Harold Bloom
Nonfiction