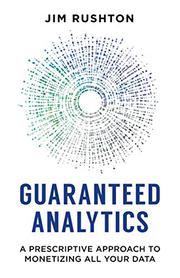 A Prescriptive Approach to Monetizing All Your Data
by Jim Rushton
BUY NOW FROM
AMAZON
BARNES & NOBLE
LOCAL BOOKSELLER
GET WEEKLY BOOK RECOMMENDATIONS:

A brief but comprehensive overview of data analytics that asserts its centrality to contemporary commerce.

According to debut author Rushton, the birth of data analytics is coeval with the marriage of computing technology and business, as its awesome power to generate unprecedented efficiencies became apparent. However, the author contends, it mainly became a means for automating transactions rather than a way to “uncover previously hidden opportunities, act on them, and create tremendous value.” Most attempts to mine the full value of an analytics project are “fraught with failure,” he says. He goes on to make a persuasive argument businesses should make data analytics—“the process of sourcing data, turning that data into information, using that information to generate insights, and then implementing those insights to monetize your data”—a strategic priority. In consistently accessible language, the author describes not only the basic principles of data analytics, but also managerial principles of “proper governance” and ways that data can become actionable and profitable; specifically, he uses case studies from businesses such as Southwest Airlines, who found a way to use data to minimize customers’ travel delays. Also, he furnishes a synoptic but edifying overview of the historical attempt to combine customer personalization with scalability. This isn’t a book designed for statisticians but for business professionals, “regardless of industry or department,” who want to unlock data analytics’ potential. Rushton’s expertise is beyond reproach—he has worked for major companies like Verizon and IBM and is a founding member of Armeta Analytics. His prose style, however, can be grating at times; for example, he often didactically poses rhetorical questions and is prone to shopworn banalities such as, “Here’s the reality: if you’re staying put, then you’re falling behind.” Nevertheless, this remains an impressively exhaustive overview of the data-analytics field and its possibilities, conveyed with helpfully illustrative examples.

A useful tour of an increasingly important aspect of business.