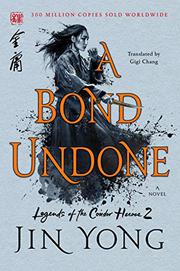 Louis Cha Leung-yung, pen name Jin Yong, died in 2018, having sold hundreds of millions of books in Chinese (and Korean and Vietnamese), all in the wuxia, or martial arts, tradition. Imagine Jackie Chan by way of Tolkien and you’ll have some sense of how the books work, their chapters peppered with improbably epic brawls among mythological figures with names such as Apothecary Huang, Hurricane Chen, and Cyclone Mei. This second volume finds hero Guo Jing and his beloved Lotus Huang battling their way across a countryside in which the bad guys seek the occult knowledge tucked away inside a martial arts manual whose devotees know all kinds of deadly kicks and punches. “You are a disciple of Twice Foul Dark Wind,” growls Tiger Peng the Outlaw by way of an introduction, and Lotus responds, “You promised to let me go if you couldn’t name the school of my kung fu within ten moves.” Ten moves should have been enough, especially since Lotus has already defeated the Three Horned Dragon and the Dragon King of the Daemon Sect, friends of Tiger Peng's. It’s not brawn but brains that get Lotus out of that particular pickle. Meanwhile, Guo Jing, who, having grown up among Mongol raiders and who thus “could tell the size of a herd by ear,” has plenty of adventures of his own, including falling into the company of a “sworn brother” who invites him to join him for some merry martial combat in the underworld; resisting the siren song of a magical death-dealing ditty; and embarking on a journey upon the “boundless sea” without telling Lotus of his itinerary—all grist for the next volume. On that score, fans of the series should rejoice that more books await, though their publication will reportedly be spread over a number of years, requiring plenty of patience.

A delightful entertainment, especially for readers versed in Chinese mythology or steeped in the films of Jet Li and company.