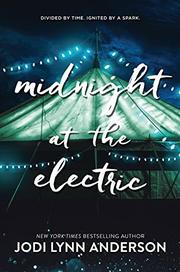 MIDNIGHT AT THE ELECTRIC

In the year 2065, 16-year-old Adri Ortiz is one of the hardworking, talented few chosen to colonize Mars.

Adri’s an orphan with ties to no one, but the Latina teen understands the importance of interpersonal cooperation, so she doesn’t complain when the head of the Mars program sends her to live with a long-forgotten cousin near the space center in Wichita for the months leading up to the launch. Lily, the cousin, is 107, passing into dementia, and more eager to know Adri than Adri is to know her. But Adri is intrigued by a postcard she finds in the farmhouse, written in 1920 and mentioning the Galápagos tortoise who still lives on the farm (and is herself named Galápagos). The story shifts to diary-keeper Catherine, a hardscrabble white teen living on the same farm in 1934, at the height of the Dust Bowl. Catherine’s little sister Beezie is dying from dust pneumonia, and their mother, a widow, seems locked into helplessness. Again the story shifts—now it’s England, 1919, and white Leonore is mourning both her brother’s loss in the Great War and the friend who left for America years before, to whom she writes. Galápagos ties the stories together as all three young women fight for self-determination, love, their futures, and the realization that you can never move forward freely until you have something important to leave behind.

Deft, succinct, and ringing with emotion without ever dipping into sentimentality, Anderson’s novel is both intriguing and deeply satisfying. (Science/historical fiction. 12-adult)

MAY BIRD AMONG THE STARS
by Jodi Lynn Anderson

WE WALKED THE SKY
by Lisa Fiedler
Children

HOW I LIVE NOW
by Meg Rosoff
Adult

THE LONELIEST GIRL IN THE UNIVERSE
by Lauren James
Adult