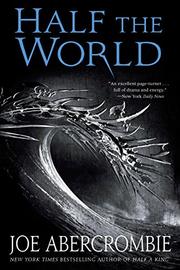 The second, independently intelligible, entry in the Shattered Sea trilogy, following Half a King (2014).

In the previous volume, Prince Yarvi of Gettland—he was born with a withered hand to warrior folk (they resemble Vikings) who value only strength—survived great challenges to become Father Yarvi, now minister (counselor) to King Uthil. But the ancient High King, prodded by the wicked, conniving Grandmother Wexen, has formed a grand alliance against Gettland. In secret, Yarvi evolves a scheme to break the High King’s ring of steel by forming alliances with the powerful but distant Empress of the South. Meanwhile, young Thorn Bathu yearns desperately to become a warrior (the first female such) in order to avenge her father. During her trial of passage she defeats fellow hopeful Brand, but unsatisfied, Master Hunnan orders her to fight three men at once. Thorn accidentally kills one, and Hunnan names her a murderer. To save her from execution, Brand courageously tells Yarvi the truth of what happened. Seeing Thorn’s potential, Yarvi takes her under his wing and, along with Brand, assembles a crew of cutthroats and desperados to make the long, harrowing trip south. They’ll be joined by Skifr, a deadly woman fighter who steals forbidden elf-relics for a living. Skifr will train Thorn to be the most lethal combatant in the entire crew—but Thorn, Brand, Yarvi and the rest will need all their formidable talents merely to survive. Again, well-handled for the most part—the thrillingly implausible action, nearly all sword, very little sorcery, is a given, with the intriguingly delicate scheming woven into the backdrop. More predictable are the romantic complications.

Superior in nearly all respects, just lacking that authentic spark of true originality.

HALF A WAR
by Joe Abercrombie
Sci-Fi

HALF A KING
by Joe Abercrombie
Sci-Fi

THE HEROES
by Joe Abercrombie

A CROWN FOR COLD SILVER
by Alex Marshall
Sci-Fi