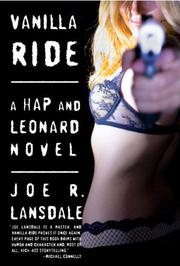 Pine and Collins, crime fiction’s most lovable miscreants (Captains Outrageous, 2001, etc.), are back in action, filling body bags for the sake of friendship.

Leonard Pine, black and emphatically gay, and Hap Collins, white and aggressively heterosexual, behave like brothers. They finish each other’s sentences, share a politically incorrect sense of humor, take pride in being tough guys, revere values like honor and loyalty, though they’d rather die than say so. When Leonard turns up at Hap’s door with a friend and a mission, he knows he’ll be welcomed despite the ungodliness of the hour. The friend is ex-cop Marvin Hanson; the mission involves his feckless teenage granddaughter and the small-time drug dealers who’ve been leading her astray. Though they may be small-time, Leonard and Hap soon learn that they have big-time connections: the Dixie Mafia, a resourceful, relentless crime family that’s been known to be lethally prickly when it feels disrespected. Things are further complicated by the arrival of Vanilla Ride, a blue-eyed assassin who gives fresh meaning to the phrase “killer smile.”

THE ELEPHANT OF SURPRISE
by Joe R. Lansdale
Fiction

DRIVING TO GERONIMO'S GRAVE AND OTHER STORIES
by Joe R. Lansdale
Mystery

DEAD ON THE BONES
by Joe R. Lansdale
Newsletter sign-up