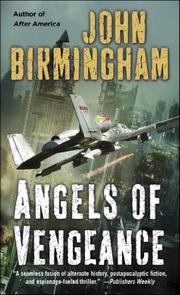 The final novel in Birmingham’s post-apocalyptic trilogy (After America, 2010, etc.) doesn’t wrap up the story so much as coast to a stop, with a frustrating amount of padding before the disappointing climax.

After a mysterious energy field known as the Wave destroys almost all human life in North America, the world is plunged into chaos, as foreign political powers are destabilized and the remaining Americans struggle to rebuild their country. Past its initial (entirely unexplained) premise, Birmingham’s series is more action thriller than science fiction, and this final installment focuses primarily on four point-of-view characters: Caitlin Monroe, a ruthless covert agent sent to infiltrate the rebellious, totalitarian Texas government; Sofia Pieraro, a hardened Mexican teen out to avenge her father’s murder; Jed Culver, chief of staff to the U.S. president; and Julianne Balwyn, a British smuggler on the run from a hit squad. Most of the action this time around takes place in the reconstituted United States, which is just getting back to a semblance of stability several years after the Wave. After having established various new political realities, Birmingham does little of note with them, and whole areas of the world remain barely mentioned. Instead Birmingham slowly and tediously draws connections among the various characters’ missions, filling many chapters with meandering exposition and irrelevant details. On several occasions he devotes substantial passages to exploring the backgrounds and points of view of characters who are then immediately killed or otherwise taken out of the story. Readers who’ve followed the trilogy from the start may be invested in the characters’ personal vendettas, but they’re disappointingly hollow compared to the largely ignored geopolitics of the changed world.

Dull characters, bland dialogue and thin plotting make for a weak final installment of the trilogy, which Birmingham closes by awkwardly setting up a potential sequel. No thanks.

WITHOUT WARNING
by John Birmingham
Sci-Fi

WEAPONS OF CHOICE
by John Birmingham

WORLDWAR: IN THE BALANCE
by Harry Turtledove
Fiction

ALL FALL DOWN
by Harry Turtledove
Sci-Fi