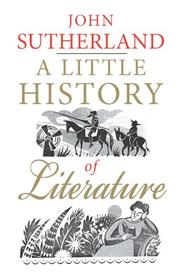 A LITTLE HISTORY OF LITERATURE

A genial, enthusiastic guide leads a jaunt through literary history.

As part of the publisher’s Little History series, Sutherland (Emeritus, Modern English Literature/University College London; Lives of the Novelists: A History of Fiction in 294 Lives, 2012, etc.) distills into 40 chapters the big subject of world literature, from its beginnings in myth to its myriad current forms as e-books, graphic novels and interactive websites. Encouraging his audience to become readers and re-readers, Sutherland believes that a children’s classic such as The Lion, the Witch and the Wardrobe—no less impressive than T.S. Eliot’s The Waste Land or Salman Rushdie’s Midnight’s Children—“helps make sense of the infinitely perplexing situations in which we find ourselves as human beings.” Many chapters focus on particular authors, mostly canonical favorites: Chaucer, Shakespeare, Milton, Spenser, Defoe, Austen, Dickens, etc. Sutherland groups 20th-century writers by theme: Kafka, Camus, Beckett and Pinter, for example, comprise “Absurd Existences”; Lowell, Plath, Larkin and Hughes represent “The Poetry of Breakdown.” Sutherland’s deftness is impressive. In a mere five pages, for example, he explicates unconventional narratives, from Laurence Sterne’s Tristram Shandy to works by J.G. Ballard, Bret Easton Ellis, Julian Barnes, John Fowles, Italo Calvino, Paul Auster, Thomas Pynchon, Donald Barthelme and B.S. Johnson, whose novel The Unfortunates “was published as a boxed set of pages which the reader can put together in any order they please.” Sutherland is confident in his assessment of great works, but he is open to the idea that “pearls” can be found among what some people call “the crud” of popular commercial fiction. His aim is not to draw a line between high art and low, but to share his prodigious joy of reading.

A lively, informative book in which the author shows how literature “enriches life in ways that nothing else quite can.”

THE NOVEL
by Michael Schmidt
Nonfiction

THE LIVES OF THE NOVEL
by Thomas G. Pavel
Indie

THIRTEEN WAYS OF LOOKING AT THE NOVEL
by Jane Smiley
Nonfiction