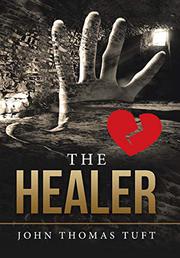 In this fantasy/thriller, a Pennsylvania man’s newfound healing ability that can save the human race puts him in danger.

It’s been a year since Gideon Waters lost his pregnant wife in a car accident. After sustaining a rock-climbing injury, Gideon gets help from Jonathan and Laurel, two strangers who take him to a hospital. It’s there he has a revelation: His blood evidently heals a sickly girl. The shocks continue, as Gideon discovers bodies back at his grandfather’s farm and subsequently flees an armed assailant. Jonathan and Laurel once again come to his aid and soon tell him they are Guardians. They have sworn to defend the impending BloodFire Redemption, which will ultimately save the human race. But the Redemption requires three prophesied individuals: the Healer (who Jonathan and Laurel are convinced is Gideon), the FireGuide, and the Sacrament Child. The child is likely the unborn daughter of Jennifer Marks, who’s currently in a coma. Her husband, Eli, encounters other Guardians and learns the Healer may be able to save Jenn. But everyone is under the threat of the BloodMaster and his blood trackers, who want to kill the Sacrament Child to ensure the Redemption doesn’t happen. Tuft (Even the Darkness, 1994, etc.) packs his novel with densely plotted backstory. This generally entails the Sanctuary Chronicles, oral stories by which the Guardians abide. The author retains mystery with the Sanctuary, as Jonathan stresses it’s not a cult or even necessarily a religion. Accordingly, some of what the characters say or the players themselves are cryptic. Readers may occasionally become as befuddled as Gideon and Eli often are. But the villains, particularly the BloodMaster, are clearly drawn, and their menace prompts a handful of deaths, including a few surprises. While the narrative favors a methodical pace over action, Tuft drops in plot twists, from characters’ connections and the implication of “other worlds” to the identity of the FireGuide.

An absorbing but slow-moving and sometimes vague redemption tale.