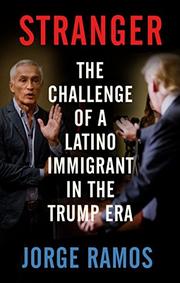 The Challenge of a Latino Immigrant in the Trump Era
by Jorge Ramos translated by Ezra E. Fitz
BUY NOW FROM
AMAZON
BARNES & NOBLE
LOCAL BOOKSELLER
GET WEEKLY BOOK RECOMMENDATIONS:

The celebrated Mexican-American journalist takes on the anti-immigration tenor of the Trump era.

On Aug. 25, 2015, Donald Trump had the author removed from a press conference in Iowa, telling him, “go back to Univision.” Already well-known for his role as anchor at that network, Ramos (Take a Stand: Lessons from Rebels, 2016, etc.) was thrust further into the spotlight following the incident, an experience that also led him to further soul-searching regarding his status as a legal immigrant in an increasingly anti-immigrant political and social landscape. Here, the author attempts to synthesize his thoughts about our present state of affairs and how, “to many people, I represent the Other.” The concept of the Other recurs throughout the book, which contains much similar material to his previous one and suffers from repetition and uneven organization near the end. Nonetheless, Ramos’ message is powerful and vital. “Almost all of us here are either immigrants or the descendants of foreigners,” writes the author, “and that has always helped us to cross borders and exceed the limits of what we thought was possible.” In brief chapters, some of which have been previously published or reworked, Ramos uses both personal storytelling and concrete data to demonstrate the absolute necessity of immigrants to the success of the U.S. as a nation. (In strictly economic terms, one estimate notes that immigrants “pay $90 billion in taxes, while using only $5 billion in public benefits.”) Of course, in the current climate of fake news, facts and figures are often ignored or distorted—something Ramos fully recognizes—but he diligently hammers them home anyway. Among other topics in these essays, the author discusses the proposed border wall, “the geography of stupidity”; Barack Obama’s lamentable deportation track record; his disappointment with the Latino voter turnout in the 2016 election; the tenuous status of undocumented workers (he dedicates the book to “the Dreamers, my heroes”); and the prospects for his children’s future.

Repetitive in places but not fatally so—a forceful, readable manifesto.

THE ROBOTS ARE COMING!
by Andres Oppenheimer
Fiction

THE MOVIES OF MY LIFE
by Alberto Fuguet
Newsletter sign-up