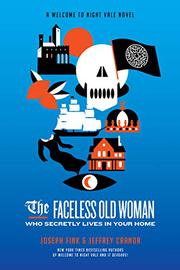 THE FACELESS OLD WOMAN WHO SECRETLY LIVES IN YOUR HOME

One of Welcome to Night Vale’s most enigmatic and terrifying characters reveals how she came to be.

The Faceless Old Woman Who Secretly Lives in Your Home is one of the outlandish podcast’s most popular characters, partially due to writer/actress Mara Wilson’s evocative portrayal. In Night Vale, the character is a specter of sorts, visible only in glimpses, who takes great fun in toying with the town’s citizenry, living in all their homes simultaneously. Here, Fink and Cranor (It Devours!, 2017, etc.) diverge from the style of their previous books to craft a chilling ghost story. The book alternates between two timelines. The first concerns the life, death, and afterlife of the unnamed narrator, born in the Mediterranean in 1792 to an idyllic childhood with her beloved father. When her father is murdered by a covert criminal ring called The Order of the Labyrinth, she swears revenge and is recruited into a life of crime by her Uncle Edmond, a ruthless outlaw. What follows is a decadeslong, globe-spanning saga of adventure, betrayal, love, and fate as she becomes the swashbuckling captain of her own pirate ship, with a crew that includes a master of disguise, a bloodthirsty neophyte, a rakish comrade, and a giantess, among others. Robberies, schemes, battles, treachery, and a vicious conspiracy to destroy a rival ensue. In the storyline set in the present, the old woman adopts Craig, a struggling copywriter, as her pet project. While she does leave him the occasional dismembered animal to keep him in line, she also pays off his debts and steers him toward his wife-to-be, Amaranta, and a heavenly life to come—perhaps. How these stories converge and how the narrator becomes immortal are merciless in their ingenuity and immensely satisfying. As the Old Woman tells Craig, “There’s a thin line separating humor and horror, and this was that line.”

IT DEVOURS!
by Joseph Fink
Fiction

IT DEVOURS!
by Joseph Fink
Fiction