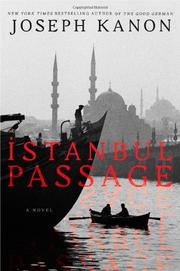 In 1945 Istanbul, Allied veteran Leon Bauer is running spy missions under the cover of a U.S. tobacco-importing business.

With the war over, U.S. operations are closing up shop in the neutral capital, but Leon has one last big job: to take possession of a Romanian defector in possession of important Russian secrets and get him flown to safety. The rub is the defector, Alexei, was involved in a heinous massacre of Jews four years earlier. Kanon (The Good German, 2001, etc.) extends his mastery of the period novel with this coiled tale of foreign intrigue. Though not much happens, plotwise, in this dialogue-driven book, Leon hardly has a moment to relax, immersed in a world of moral and political upheaval. When he first arrived in Istanbul with his wife Anna, the city was a paradise with its scenic river view, cultural riches and feeling of mystery. Now, badly injured in an accident, Anna lives in a nursing home, awake but uncommunicative, leaving Leon to contend with a circle of friends and associates he can't trust. After shooting rather than getting shot by his duplicitous supervisor in a tense late-night encounter along the river, he can avoid suspicion only so long before the brutal secret police, Emniyet, are onto him and the secretly stashed Alexei. There is little about the novel that is not familiar, but this is comfort fiction of the smartest, most compelling and nonpandering kind. Even as he evokes classics such as Casablanca, The Quiet American and A Perfect Spy, Kanon shows off his gift for morally gripping themes, heart-stopping suspense and compelling characters.

With dialogue that can go off like gunfire and a streak of nostalgia that feels timeless, this book takes its place among espionage novels as an instant classic.

I COULDN'T LOVE YOU MORE
by Jillian Medoff
Mystery

DON'T EVER GET OLD
by Daniel Friedman
Fiction

HAPPINESS IS A CHEMICAL IN THE BRAIN
by Lucia Perillo
Fiction

THE ACCOMPLICE
by Joseph Kanon
Fiction

THE GOOD GERMAN
by Joseph Kanon

The Patricide
by Kim Ekemar
Fiction

DANCING FOR THE GENERAL
by Sue Star
Fiction

A Flash of Blue Sky
by Alon Preiss
Newsletter sign-up