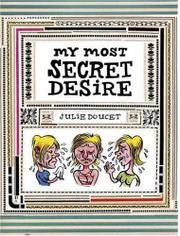 MY MOST SECRET DESIRE

A dirty mind proves creatively liberating and socially subversive, as this Montreal native finds catharsis for her deepest fears, desires and neuroses through these drawings of her dreams.

Graphic narratives don’t get much more graphic than the comix of Doucet (My New York Diary, 1999). Within this journal of dreams, one strip that she titles “If I Was a Man” shows in explicit detail how she’d have sex with a woman, one who would have to have huge breasts, because Doucet would have such a large penis. Penis envy (or at least obsession) informs a number of the other dreams, as one of them allows the artist with her surprising new appendage to have a different kind of fun with her girlfriends (and attract a very interested Mickey Dolenz of the Monkees). Many of the strips transverse or dissolve the boundary between dreams and Doucet’s conscious state, with some of them showing her awakening to the discovery of what a weird dream she’d been having, while others reflect dreams within dreams. She crams her drawings with obsessive detail, to humorous and occasionally claustrophobic effect. From menstruation to masturbation to motherhood (she births and nurses a cat), she proceeds in fearless fashion, as if she has never experienced an impulse that she feels is forbidden to illustrate and share. All of the dreams and drawings are dated, mainly from the late 1980s and early 90s (when Doucet was in her early-to-mid-20s). Over the passage of years, the panels become larger and lighter, with a little more breathing room, as if the pressures on the artistic subconscious have eased a little. As with Harvey Pekar’s early collaborations with Robert Crumb, she presents the work as straightforward confessions from a mundane existence, never romanticizing herself or belaboring the humor. Even the reader who hasn’t experienced such fantasies will likely know just how Doucet feels.

Doucet’s dreamscape is an intriguing place to visit, though it might be a little scary to live there.