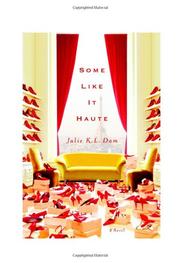 Single American fashionista, in Paris for the couture shows, falls for a hunky compatriot with a secret in this debut novel from People magazine editor Dam.

Texas-born Alex Simon’s Paris trip starts off badly when she accidentally collides with a six-foot Latvian model in the middle of the Chanel runway. The ignoble incident is captured on television, and Alex’s shame drives her into hiding (and a room-service binge). A fashion reporter who boasts of being “both smart and shallow,” she emerges from her self-imposed exile long enough to attend the launch of up-and-coming designer Luis-Heinz. Wowed by his talent, Alex is eager to land an exclusive interview with the reclusive Peruvian-Swiss dressmaker, but finds herself distracted by the arrival of Nick Snow, a fashion-challenged (i.e., straight) “consultant” also in town for the shows. The two hit it off immediately and spend the rest of the night together, leading to several other breathlessly romantic Parisian encounters. Alex is so smitten with the handsome New Yorker that she neglects to find out what, exactly, he consults on, and mistakes the distant flashing of paparazzi lights for falling stars. Has love gone to her head? Kind of, because Nick, it turns out, is actually starring in a reality show about a young man desperate to date models, and the cameras are trailing him. His dishonesty hits Alex almost as hard as misplacing her favorite pair of Manolos. That Nick can forsake his harem of contractually obligated beauties for witty Alex is never really in question, but she wonders if she can ever believe a thing he says. Meanwhile, Luis-Heinz goes missing, and his lover and publicist enlist Alex to help find him. Much sitcom-like silliness ensues, leading to all the obvious questions. Will Alex forgive Nick, find Luis-Heinz and file her story? Just as importantly, will Luis-Heinz provide her with one of his magically flattering dresses?

A soufflé-light spoof of fashion and the people who love it.