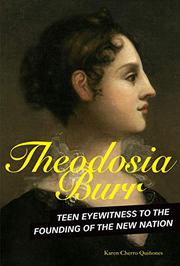 The life and times of Theodosia Burr (1783-1812), daughter of Aaron Burr, third vice president of the United States, best known today from the hit musical Hamilton.

In presenting the story of Burr, the author uses correspondence and memoirs of contemporaries to provide a portal to the past. Readers learn that Theodosia had an unusual childhood. Her father believed in Mary Wollstonecraft’s feminist theories; Theodosia studied a curriculum equal to that of boys. As an upper-class girl from a prominent New York family, she had opportunities to meet and mingle with men who became household names in the early history of the U.S. Details about Theodosia’s upbringing, education, and activities are interspersed with information providing additional historical context. The writing is crisp, clear, and engaging. Full-color illustrations add visual appeal. The book does not delve much into issues of racial or ethnic diversity; there is a brief note about the Lenape, and the book notes that although Burr married a Southerner and lived on a plantation, there is no record of her thoughts on slavery. Although she died young under tragic and mysterious circumstances, Burr’s prominence as an educated, modern woman made her a role model for her time.