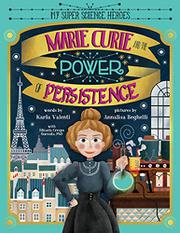 MARIE CURIE AND THE POWER OF PERSISTENCE

Marie Curie was a superhero!

This first entry in the My Super Science Heroes series of highly fictionalized biographies details Curie’s brilliant achievements but pits her against a cartoonish archenemy determined to stop her. Super Evil Nemesis aims at world domination by halting the spread of knowledge. He sends his minion, Mr. Opposition, to thwart young Maria Skłodowska. Try as he might, Mr. O fails. Maria excels at her studies; after high school, since universities are closed to women, she pursues her lessons secretly. Moving to Paris, she adopts the name Marie and earns degrees in physics and math. After Marie marries Pierre Curie, the two collaborate, winning the Nobel Prize in physics in 1903 with Henri Becquerel. In 1911, Marie wins another Nobel—for chemistry. This is a fact-filled, admiring examination. Unfortunately, however, her casting as a superheroine against a comic-book stock villain trivializes her. Not helping is the author’s breathless, demeaning remark that “She even loves mathematics and physics!” to demonstrate Curie’s youthful studiousness. Colorful and child-appealing, though static, illustrations feature humans resembling wide-eyed, pink-cheeked marionettes (all present white). Nemesis is a blue, sharp-toothed figure with striped horns and a crown; Mr. O is a red, four-legged, spiny-backed, counterintuitively cute creature sporting a fedora. Numerous “ALERT!” sidebars, a glossary, and a timeline bolster the factual load.

Scientific genius is a superpower of its own and does not need this pandering treatment. (websites) (Picture book/biography. 4-8)