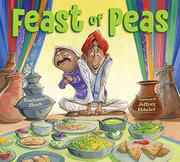 Jiva, a hardworking gardener in India, eagerly anticipates his peas.

“Plump peas, sweet peas, / Lined-up-in-the-shell peas. / Peas to munch, peas to crunch, / I want a feast of peas for lunch.” He hoes, he waters, he weeds—and he waits. As his pea blossoms become pods, he builds a scarecrow from sugar cane stalks, an old dhoti, and a red turban to keep the birds away. Jiva’s neighbor, Rujvi, is mighty interested in Jiva’s pea harvest: “Jiva, some of your peas look plump,” he says. Jiva assures Rujvi that he will pick them the next morning, but when he goes to do so, they are gone! Rujvi suggests the rabbits might have eaten the peas, so Jiva builds a fence. When the same thing happens again a few days later, Rujvi suggests that a ghost might have eaten the peas. Jiva is perplexed: Neither a scarecrow nor a fence will keep out a ghost. Jiva finally realizes he has been tricked by Rujvi and concocts an elaborate ruse to catch him in the act. After a mad dash through the village, Rujvi apologizes and makes a feast of peas—“peas with rice and spice, peas wrapped in mashed potato pockets, and peas swimming in soup”—for Jiva. Sheth’s use of language (poetry and repetition) is a singular delight. Equally charming are Ebbeler’s illustrations, which include lots of funny details, with exaggerated and elongated cartoon-style figures that make the most of the story’s humor.

SONA AND THE WEDDING GAME
by Kashmira Sheth
Children

TIGER IN MY SOUP
by Kashmira Sheth
Children

BOYS WITHOUT NAMES
by Kashmira Sheth

ELLIE MAY ON PRESIDENTS' DAY
by Hillary Homzie
Children

HANUKKAH COOKIES WITH SPRINKLES
by David A. Adler
Children

TIGER IN MY SOUP
by Kashmira Sheth
Children