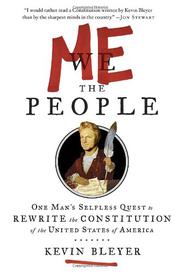 One Man's Selfless Quest to Rewrite the Constitution of the United States of America
by Kevin Bleyer
BUY NOW FROM
AMAZON
BARNES & NOBLE
LOCAL BOOKSELLER
GET WEEKLY BOOK RECOMMENDATIONS:

An often funny, politically provocative illumination of the Constitution, a document that all politicians and most Americans revere without really understanding its contents or origins.

Even as revised by the Emmy-winning Bleyer, there is no provision in the Constitution mandating that anyone who has ever been associated with The Daily Show be given a book deal. If there were, this would still be one of the better ones to emerge from that publishing tribe. Bleyer makes readers think as well as laugh, and he targets those with the attention span for book-length arguments rather than TV bits. As he writes of the Constitution, “For two centuries, we have been expected to abide by it, live by it, swear by it—some of us, officially—yet we have no idea what it says.” Bleyer demonstrates that the Constitution is a document that generated heated controversy during its drafting, in its attempts to strike compromises on such crucial issues as the relative powers of federal and state governments, the checks and balances that the three branches would exert on each other and the danger that a chief executive might come to resemble the king that the colonies had fought for against their freedom. “From page one, the Constitution is, by its own admission, a compromise,” writes Bleyer of the document accorded an almost biblical level of secular authority. “I’m not suggesting there’s something inherently wrong in compromise. I’m saying it. I’m screaming it to the rooftops. We’re America, dang it.” Yet even its framers considered the Constitution sufficiently flawed that they immediately amended it with the Bill of Rights, which Bleyer terms “a signing bonus. A bribe. The constitutional equivalent of a set of steak knives to sweeten the deal on a new bank account.” Among the radical suggestions in Bleyer’s revision is to make every citizen a member of Congress, since, as it stands, “Con-gress is the opposite of pro-gress.”

Funny stuff with both a point and a perspective.

Bleyer latest project, Me The People: One Man's Selfless Quest to Rewrite the Constitution of the United States ...