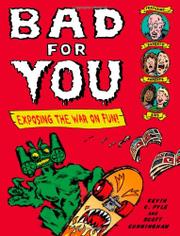 As title and subtitle indicate, a survey of wet-blanketry through the ages.

In broad chapters covering campaigns against comics, games, technology, play and thought, comics creators Pyle and Cunningham move from their area of expertise to less focused discussions of the ways the Man has sought to drain, mostly, adolescence of all enjoyment. They adopt a gleefully pulpy narrative mode conveyed in sequential panels, full-page cartoons and occasional eye-straining stretches of cramped text. There is a lot going on, both visually and in terms of content, and readers may find themselves disoriented by the pinball-machine approach the authors take. From a brief and engaging sketch of the beginnings of America’s comic-book industry, they move to Fredric Wertham and The Seduction of the Innocent—a natural progression. But in short order, they proceed from comics to a detour on the scientific method, then to folklore, the Comstock laws and Harry Potter before moving back to fairy tales and then on to fantasy play—and that’s all in the opening chapter that’s nominally on comics. The prose is frequently rough-hewn and unapologetically shrill: “Speaking of SAVE—that’s exactly what the controversy did for the vampire-trapping game [“Night Trap”] (sales had SUCKED until then).” Quotations from an admirable wealth of sources are liberally included, but they are rarely sourced in the text, leaving readers to wonder who really said what. A glossary at the beginning defines such terms as “abstinence” and “statistics,” but both it and the text leave such terms as “disbarred” and “profiling” unexplained.

HOW TO BE A ZOMBIE
by Serena Valentino
Children

SUPERMAN VERSUS THE KU KLUX KLAN
by Rick Bowers
Children