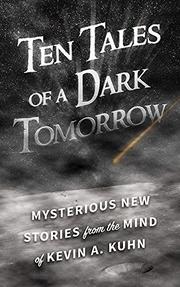 TEN TALES OF A DARK TOMORROW

In his introduction, Kuhn (Do You Realize?, 2017) cites The Twilight Zone as an inspiration for his tales. Much like the classic TV series, the stories here, though primarily SF, cover assorted subgenres, including comedy, horror, and melodrama. “A Drink of Knowledge,” for one, follows three young boys sampling moonshine who are nearby when a meteor crashes to Earth. There may be something inside a meteorite they find, but is it malevolent? A few tales, like the opening “My Little Girl,” are akin to fantasies but also boast SF elements such as parallel universes and time travel. The narratives are generally about control, which often ties in with humans’ potentially bleak future. In “Terror on Pandor-3,” an archaeological crew discovers an ancient artifact that, the group soon learns, has the means to control it. That may be the same thing Alica, the artificial intelligence in “For the Hive,” is doing to humans—presumably to protect them from risks (for example, a black hole). Even aliens try to effect control via the Galactic Empire, which crops up in two of the more indelible stories: “The Case Against Humanity” and “Sally Ann, Queen of the Galaxy.” The Empire in “Case” is deciding between admitting Earth to the organization and extinguishing humanity before it destroys itself. In the quirky latter tale, ruler-to-be Sally Ann is currently on Earth as a 12-year-old girl. But as she’s bright and already popular with the galaxy’s citizens, corrupt individuals in power may want to prevent her impending reign. Kuhn writes in an unadorned style with minimal details, though there are more than enough to spark the imagination. For example, one character in “Teach a Man To Fish” describes planet Rakislav as “where the air’s not breathable, the sky’s always gray, and the most exciting thing you’ll see is the lightning show during a dust storm.” Despite all the fantastic goings-on, characters also grapple with serious, timely issues, including child abuse and racism.