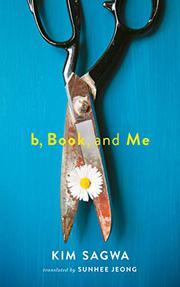 "The city we lived in was ridiculous," Rang announces to the reader, "because it was a city that imitated Seoul." "Everybody who lived there was pretty much the same....Except there was one kid who wanted to be a fish." This is Rang's best friend, b. Rang points out that being a fish would mean having scales and being ugly, but b sticks to her guns: "I'll go into the water and I'll never come back out." Rang's parents show no interest in her while b's are overwhelmed by poverty and her sister's illness. Rang's beloved Grandma is drifting toward senescence. Don't ever get lost, she insists, or you'll wind up at the End, a place north of the hill where "the abandoned people" live. Rang and b play at the beach, struggle to fit in at school, and hang out at a cafe called Alone ("Adults thought the name was ridiculous...b and I thought it was cool"), where they meet a bookish loner. Rang is targeted by bullies at school, boys identified only by their baseball hats who regularly kick and hit her until she bleeds, and no one but b ever steps in. The girls are straddling childhood and young adulthood without guidance or help. And when Rang inadvertently exposes b's poverty, their friendship ends with devastating abruptness and pushes them separately toward the dreaded End. Told alternately from Rang’s and b's points of view, the text is broken into short, sometimes-dreamlike sections that capture their teenage angst and moods. "I feel agony and I'm getting even more boring." "I was incredibly hungry."

A dark, dystopian view of South Korean adolescence, hopelessness, and the cruelties children are capable of inflicting on each other.

THE VEGETARIAN
by Han Kang
Fiction