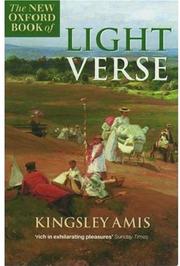 "Anon. is not my favorite poet," writes K. Amis, butting against the first Oxford Book of Light Verse (1938) compiled by W. H. Auden, which includes anonymous ballads, folk songs, and nursery rhymes right along with the poems of Chaucer-to-Byron-to-Betjeman. Auden took light verse to be popular verse--"simple, clear, and gay," the natural voice of the people, and not always humorous or cheerful. Amis, who will have none of this socialist-tinged nonsense ("I will be satisfied if another generation. . . sees in mine a reactionary anthology"), has compiled a collection of poetry which is light by contrast with high and serious verse, "subversive, disrespectful," technically impeccable ("a juggler is not allowed to drop a plate"), and, in its developed form, a product of modern times. Here, the output from Shakespeare and Jonson to Swift, Southey, Byron, and Hood occupies only 80 pages (which, for reasons given, allot no space to Dryden, Pope, or Burns). Then we are treated to a large sampling of vers de societe from Praed ("Good night to the Season!--the dances,/The fillings of hot little rooms") to--surprise--Thomas Hardy to Betjeman, Auden, and Philip Larkin who, even at their most frivolous, transcend the form. There is a plenitude of parody (a glut, one suspects, for some tastes), a so-so assortment of nonsense verse (big on Gilbert, weak on the too-"whimsical" Lear), some lovely oddments (like the anon. clerihew: "Spinoza/ Collected curiosa:/ Bawdy belles-lettres,/ Etc"), and, as he notes, a large representation of the poets of Amis' generation, some of them rather too archly British to elicit anything but a sneer over here. (The small, unrepresentative American selection--B. Franklin, Bret Harte, Frost, De Vries--is best forgotten, as the title suggests.) So: a strongly flavored selection, sparkling and accomplished and sedulously unserious, to supplement (but not supplant) Auden's more lingering measures.
Pub Date: June 1st, 1978
ISBN: 0192820753
Page count: 347pp
Publisher: Oxford Univ.
Review Posted Online: March 19th, 2012
Kirkus Reviews Issue: June 1st, 1978