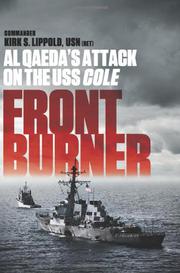 A meticulous history of the USS Cole attack and America’s response, which Lippold, the ship’s commander at the time, considers shamefully weak, laying the groundwork for what followed.

On Oct. 12, 2000, suicide bombers attacked the Cole in the port of Aden in Yemen, killing 17 crewmen and injuring twice as many. Eleven months later, 9/11 captured our attention, but the Cole attack remains a vivid memory for the ship’s commander. After reviewing his 20-year career in the peacetime Navy, Lippold cuts to the immense explosion, which everyone first assumed was a refueling accident. There follows nearly 200 pages of exhaustive description of the devastating damage, the crew’s heroic response, which saved the ship from sinking, and 20 days of assistance, repairs, politics and investigation that did not end when the Cole returned to the United States. In the final 100 pages, the author recounts the fate of the ship (repaired), the lives of the survivors and bereaved and the many inquiries: into the crime, into the Navy’s antiterrorism policy and into Lippold’s conduct. Traditionally, losing a ship ends its commander’s career. Not concealing his resentment, Lippold recounts several historical exceptions and then describes in painful detail how his superiors absolved him of blame but surrendered to political pressure. He was repeatedly denied promotion and retired in 2007. Unlike many military memoirs, this one shows little partisan bias, as the author expresses equal contempt for the Clinton, Bush and Obama administrations.

While the best examination of our failure to take al-Qaeda seriously remains Lawrence Wright’s The Looming Tower (2006), Lippold delivers a personal, opinionated account of the last outrage before 9/11 which should have galvanized our leaders but didn’t.