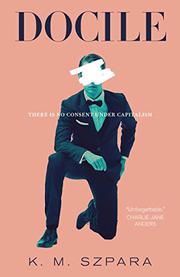 The relationship between a young debtor and the trillionaire who owns him serves as a parable for the ills of capitalism.

Debut novelist Szpara imagines an only slightly more dystopian United States than the one that exists today, in which the wealth gap has grown so large that the country is more or less split into trillionaires and debtors. Debtors inherit their family's debt, increasing it exponentially over time. To pay it off, many sign up to become slaves for a predetermined amount of time, with the “choice” to inject a drug called Dociline that turns them into a kind of blissful zombie who has no memory, pain, or agency for the duration of their term. The drug is supposed to wear off within two weeks, but when Elisha Wilder’s mother returned from her debt-paying term, it never did, leaving her docile indefinitely. To resolve the rest of his family’s debt, Elisha becomes a Docile to none other than Alex Bishop, the CEO of the company that manufactures Dociline. He invokes his right to refuse the drug, one of the only Dociles ever to do so. Alex enacts a horrifying period of brainwashing in order to modify Elisha’s behavior to mimic that of an “on-med.” The resulting relationship between them is disturbing. As Alex wakes up to his complicity in a broken system—“I am Dr. Frankenstein and I’ve fallen in love with my own monster”—he becomes more sympathetic, for better or worse. As Elisha suffers not only brainwashing, rape, and abuse, but the recovery that must come after, his love for—fixation with, dependence on—Alex poses interesting questions about consent: “Being my own person hurts too much….Why should an opportunity hurt so much?” However, despite excellent pacing and a gripping narrative, Szpara fails to address the history of slavery in America—a history that is race-based and continues to shape the nation. This is a story with fully realized queer characters that is unafraid to ask complicated questions; as a parable, it functions well. But without addressing this important aspect of the nation and economic structures within which it takes place, it cannot succeed in its takedown of oppressive systems.

An engrossing and fast-paced read that doesn’t hit the mark it aims for.