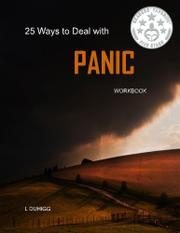 25 WAYS TO DEAL WITH PANIC

How to stop panic in its tracks, in 25 not-so-easy but doable ways.

For some people, panic is more than a passing phase. It can unleash a self-perpetuating cycle of emotions and physical symptoms that traps and immobilizes the sufferer. In her debut, Duhigg presents simple tips for interrupting a panic attack and breaking free of the cycle. Some suggestions target the moment of an attack to facilitate immediate relief. The conventional wisdom of controlled breathing is at the top of the list, which also includes engaging with a source of joy, mentally shouting “Stop” at the panic or talking to it as if it were a child. Other tips suggest ongoing courses of action, such as therapy or journaling, that could diminish susceptibility to panic and ultimately help control it. Essentially, the goal is to create a feeling of safety, which will diminish the symptoms and end the attacks. Each tip comes with a coping mechanism, an explanation of its effectiveness and brief exercises, ranging from action—get a massage, take a walk outside, etc.—to drawing assignments to questions with blanks for answering. Although they’re numbered, the strategies need not be read or followed sequentially, and since they don’t build on each other, this format could invite reaching for the book in a crisis and opening it randomly. Duhigg’s approach is straightforward yet compassionate, with succinct, efficient language that would be accessible even to an agitated mind. Even though she divulges little more than a vague sentence or two about her experience, she speaks with the authority of one who has experienced panic firsthand, rather than from a medical or academic perspective. More information about her background, qualifications and sources for her tips would be welcome and could bolster her credibility.

A practical, straight-talking self-help workbook that could serve as a life preserver for the panic-stricken.