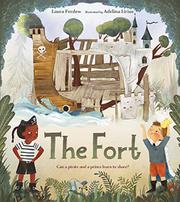 Two children unwittingly—and unwillingly—share a fort in the woods, until one day their paths cross; will they fight or unite?

The prince, a white boy, struts toward his “castle,” planning his feast—only to discover, among other pirate effects, a treasure map scribbled on his invitation and an eye patch on the floor of his great hall. He rids the place of the pirate things and continues planning his royal feast. The next day, the pirate, a black girl, dreams of travel and treasure as she parades toward her “ship”—but she discovers a feast invitation, a crown, and table settings. She tosses out the royal items and tidies up on deck. Each finds the unwelcome changes on their next solo visit too, but on the day of the feast, the prince and the pirate come face to face. When each discovers their intruder, a fight over the space with shouts of “No pirates allowed” and “No royalty allowed” gives way to a new use for the fort: spacecraft. This is a vision the two children can, and do, share. The illustrations bring the children’s imaginations to life on the page, turning the fort into lush scenes depending on the beholder, leaving it simple and ragged only when the two argue. The values of imagination and collaboration are conveyed without a heavy hand. Two caveats: The interracial casting does not reflect real-world power dynamics, even among children, and one unfortunate imaginary scene sees the white boy presiding over a group of subjects of color.