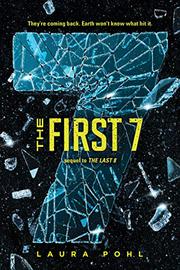 Seven months have passed since the Last Teenagers on Earth incapacitated the brutal Hostemn alien threat.

Leaving behind a devastated, barren Earth via spaceship, the diverse group of teens decides on a little intergalactic exploration to escape from their traumatic post-invasion lives. A distress signal coming from Earth cuts their journey short, and soon, Clover and friends end up back on a seemingly renewed Earth looking for survivors. Their return, however, results in more complications. Otherworldly crystal clusters have sprung up, corrupting the land—as well as the group’s resident alien friend, Andy—and an invisible barrier prevents them from leaving. When Clover and the gang come across a colony of human survivors led by the mysterious Castor, their search for answers promises to sever the bonds that once united them. Pohl’s (The Last 8, 2019, etc.) conclusion to this benign duology succeeds in mapping out meaningful character development beyond the story’s main protagonist, Clover. As a result, this sequel makes for a more engaging read than the first installment. Moreover, Clover’s struggles with depression and PTSD and her identity as aromantic underscore the novel’s most poignant passages, and the author does an admirable job of addressing these topics with sensitivity that’s just short of cloying. Awkward pacing, repetitive language, and inconsistencies in characterization prevent the novel from achieving true greatness, but there’s much to appreciate here.