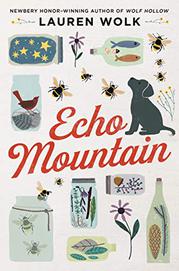 After losing almost everything in the Great Depression, Ellie’s family moves to the Maine woods on Echo Mountain to start a farm—then tragedy strikes.

Not long after getting them established in their new life, Ellie’s father is struck on the head by a falling tree and lapses into a monthslong coma, his recovery unlikely. Never feeling threatened by the wilderness the way her mother and older sister, Esther, do, Ellie takes over many of her beloved father’s chores, finding comfort and confidence in the forest. She’s fully mindful of her place in the natural world and her impact on the plants and animals she shares it with. After she becomes determined to use the resources of the woods, however novel and imaginative the application, to save her father, conflict with her mother and Esther increases sharply. Led by a dog, Ellie discovers elderly Cate—called “hag” and shunned as a witch—badly injured, living alone in a cabin on the mountaintop. Cate fully understands the 12-year-old’s slightly supernatural sense. Cate’s grandson, Larkin, Ellie’s age, flits in and out of the tale before finally claiming his place in this magnificently related story of the wide arc of responsibility, acceptance, and, ultimately, connectedness. Carefully paced and told in lyrical prose, characters—all default white—are given plenty of time and room to develop against a well-realized, timeless setting.

BEYOND THE BRIGHT SEA
by Lauren Wolk
Children