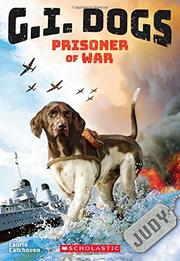 If dogs could talk, World War II veteran Judy might have described her adventures the same way Calkhoven does.

Judy was an English pointer who was born in Shanghai in 1936. During peacetime, she was adopted by the crew of a British gunboat, the Gnat, and later transferred to the HMS Grasshopper. This latter boat, with civilian refugees onboard, was attacked by the Japanese and sunk in February 1942. The survivors, including Judy, took refuge on an island but were captured by the Japanese. Judy and her POW caretakers spent the rest of the war in prison camps where brutal treatment, little food, and a high mortality rate were the norm. Judy, while staying away from and defying Japanese guards, surreptitiously gathered food for the starving men and also helped morale by performing tricks she was taught by her human friend Frank Williams. After the war, Frank and Judy returned to England, but later they worked in Britain’s African colonies, where (she reports) she was euthanized at the age of 14. Judy’s fictionalized story is a remarkable tale of loyalty and the bond that can develop between dogs and people, describing but not focusing on the brutality of war. The young readers’ edition of Robert Weintraub’s No Better Friend (2016), for a slightly older audience, presents Judy’s story with much more detail, but this effort is just right for emergent readers.

MICHAEL AT THE INVASION OF FRANCE, 1943
by Laurie Calkhoven
Children

WILL AT THE BATTLE OF GETTYSBURG, 1863
by Laurie Calkhoven
Children

DANIEL AT THE SIEGE OF BOSTON 1776
by Laurie Calkhoven