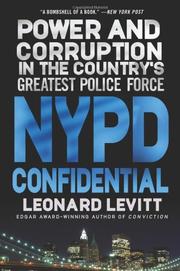 Since 1994, Edgar Award winner Levitt (Conviction: Solving the Moxley Murder, 2004, etc.) has written a hard-hitting column about the NYPD, first for Newsday and, since 2005, at NYPDConfidential.com. (The author lost his press pass to One Police Plaza in 2007.) Based on mostly anonymous interviews with police officials, his book details the latest scandals in a culture of corruption and cover-up as old as the 36,000-member department. Behind it lies the well-known loyalty of police officers (the “Blue Wall of Silence”), which, says Levitt, has led to “horrendous acts of corruption and brutality.” Although the NYPD refuses to acknowledge it, increasing numbers of cops are being accused of corruption, he says, while the city’s media, in a “post-9/11 swoon” over New York’s finest, look the other way. Beyond recounting many familiar scandals, Levitt analyzes the endless posturing and politicking among city officials and police brass, whose egos and agendas clash endlessly while public-information officers scurry to manipulate media coverage. The author describes how Mayor Giuliani and Police Commissioner William Bratton jockeyed for credit as they pushed their “zero tolerance” policing; how the mean, humorless Commissioner Howard Safir increased racial tensions by turning police officers into “cowboys”; how Commissioner Bernard Kerik, Giuliani’s former bodyguard and President George W. Bush’s nominee to head the Department of Homeland Security, self-destructed in a series of scandals; and how Commissioner Ray Kelly’s counterterrorism push has turned the department into a “mini CIA” with little oversight. Levitt also offers bright snapshots of such characters as Jack “the Jackster” Maple, a foppish deputy commissioner who developed a computerized system for collecting statistics on crime patterns.

Eye-opening reporting on America’s largest and most powerful police force.

THE NYPD TAPES
by Graham A. Rayman
Nonfiction