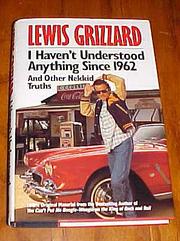 I HAVEN'T UNDERSTOOD ANYTHING SINCE 1962

 Prolific country cutup Grizzard (You Can't Put No Boogie Woogie on the King of Rock and Roll, 1991, etc.) turns a little ill-tempered in this year's offering. Grizzard's angry and he's not going to take political correctness anymore. Any jeremiad against the ``speech police,'' as he calls them, is welcome, of course, but the humorist is slightly strident and pretty offensive as he presents a maundering, maudlin defense of his own beloved Culture, that of the Straight Southern White Male. That means considerable puerile admiration of feminine breasts (big ones) and masculine ``Johnsons'' (of any size), of pickup trucks and beer bellies. It means hatred of ``bus station queers,'' Yankees, and wimpy ``pissants.'' (For the record, let it be noted that the author is skinny, doesn't hunt, and was a member of the Key Club in high school.) Jane Fonda, the Reverends Al and Jesse, and all of New Jersey seem to blight Gizzard's waking thoughts, while his only comforts are Goo-Goo candy bars, the Grand Ole Opry, and the philosophy of Pat Buchanan. ``Anybody who don't like Hank Williams can kiss my ass'' is his theme, and that goes for the reader or anybody else Grizzard chooses. He goes on at length about ``white trash'' and why he doesn't belong in that sorry category, and there's a heartfelt (as in country-western lyrics) tribute to rednecks. The text is readable enough, e.g., in the case of Aunt Jillie, who ``talked fifty miles an hour with gusts up to seventy.'' There are no hard words. But, on the whole, the humor is nasty. Wisely, the author tour won't go north of the Mason-Dixon Line: Robert E. Lee would spin in his grave if Grizzard's antics were taken at face value. This Georgia peach is getting a bit soft in spots. He gives more umbrage than he takes.