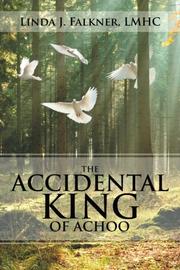 THE ACCIDENTAL KING OF ACHOO

A fable centers on authority and ambition.

The beginning of Falkner’s (Dangerous Wishcraft, 2013) novella revolves around Jeremiah Abadon, a thoroughly loathsome man, “disliked and distrusted,” but also very wealthy. He’s traveling with his slaves, neglected children, and miserable 42 wives, trying to stay one step ahead of the angry citizens of every city where he sets up shop. He’s seeking to settle down, and when he and his followers reach a vale heavily planted with trees that trigger allergic sneezing, they decide to name the place Achoo. Jeremy likes the land for its natural beauty but also for its seclusion and the safety it might afford him from his enemies. He appoints himself king and establishes a monarchy. Generations later, each successive ruler is chosen by various physical contests and reigns for life. One year, the current king unwisely decides to participate in a competition “during holiday celebrations, along with the villagers.” The contest involves jumping a horse across a large number of toilets. When the king ends up headfirst in a toilet and soon dies from shock, Achoo is left without a monarch. A remedy for the chaos is decided upon: a footrace will be held. There are many entrants, and one of them is older than the others and thoroughly out of shape: Orgizo Abadon, distant descendant of the despicable Jeremy. Orgizo is a spoiled, sour figure, “accustomed to being first in everything because of his privileged position at birth,” and he cheats his way to victory in the race. He likewise wins against the odds in the subsequent contests and becomes king of Achoo, even though the monarchy has never interested him—only power. The long contests for kingship, the various candidates for the crown, and the squalid figure of Orgizo himself are all deftly drawn, easily recognizable stand-ins for the primaries and contenders—and eventual winner—of the 2016 U.S. presidential race. (Readers are told that Orgizo vows to “make Achoo great again.”) The playfulness of Falkner’s prose—“How could this have happened?” the tearful villagers wonder. “Would their village even survive under Orgizo?”—offsets a good amount of the satiric bitterness that can be perceived under the amusing fable. The author can be a bit heavy-handed—an occupational hazard of allegories—but in general her treatment is enjoyable enough for both blue state and red state readers.

A pointed and entertaining political allegory on American society.