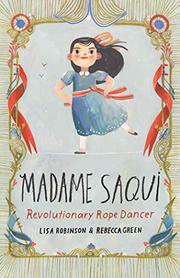 Marguerite-Antoinette Lalanne and her family flip and tumble onstage in late-18th-century Paris. Marguerite longs to dance on a tightrope, like her parents. But political upheaval in revolutionary-era France drives the family to the countryside, where, secretly, Marguerite takes ropewalking lessons. When her parents see her perform, they decide to return to circus life. After Marguerite marries, performing as Madame Saqui in her husband’s family circus, she heads back to Paris, becoming its “darling” and Napoleon’s favored acrobat. An inspirational tone — emphasizing the setbacks Saqui faced, her strong-willed spirit, and her daring feats (including ropewalking between the towers of Notre Dame de Paris)—pervades the story: “And she never fell,” readers learn on the final page, as an elderly Saqui ropewalks in her 70s. Green’s muted, stylized illustrations feature dramatic moments, as when Saqui, clad in a flowing white dress, dances across a tightrope as fireworks and stars twinkle in the Parisian sky. Saqui and most characters are white, but there is some diversity among other performers. Where readers fall on the complex legacy of Napoleon (warmonger or French hero?) may color their feelings about the book’s tone; as he “waged war across Europe, Madame Saqui reenacted his battles.” Italicized French words are sporadically incorporated into the text.

A reverent introduction to a trailblazing performer. (glossary) (Picture book. 6-12)

A YEAR WITH MAMA EARTH
by Rebecca Grabill
Children

IQBAL AND HIS INGENIOUS IDEA
by Elizabeth Suneby
Children

HOW TO MAKE FRIENDS WITH A GHOST
by Rebecca Green
Children

FROM FAR AWAY
by Robert Munsch

KING OF THE TIGHTROPE
by Donna Janell Bowman
Children

EVERYBODY BONJOURS!
by Leslie Kimmelman
Children