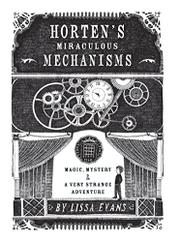 Wacky, funny and ever so mysterious, this clever tale hits the ground running and never lets up.

Very short 10-year-old Stuart Horten—S. Horten, get it?—thinks he’s facing a long, boring summer when his parents pack the three of them up and move to his father’s hometown as school lets out. His parents are a pleasantly oblivious pair: His mom is an unimaginative doctor, and his father designs crosswords for a living. (He joyfully tosses around hundred-dollar words like "prestidigitator" and "perambulation.") Stuart quickly discovers the long-abandoned home of his great uncle Teeny-Tiny Tony Horton, a famous magician who disappeared 50 years before, and the puzzle box left to his incurious father. Resourceful Stuart wants to learn more, but he’s plagued by the girl next door, who’s intently following him everywhere. Just as a fabulous clue appears in a vandalized phone booth, the prying girl, April, shows up, and it turns out she’s identical twins—oh, no! triplets—April, May and June. And they’re shortly followed by the villainous, entrepreneurial Jeannie, hot on Stuart’s heels. The pace is rapid, the clues to Tony’s disappearance are intriguing and the characters are vividly—often hilariously—drawn. Irony runs hand in hand with just enough believable danger to create palpable tension.

SUMMER OF THE GYPSY MOTHS
by Sara Pennypacker
Children

THE DUCKLING GETS A COOKIE!?
by Mo Willems
Children

WHAT LITTLE BOYS ARE MADE OF
by Robert Neubecker
Children

INTO THE WOODS
by Lyn Gardner
Children

BEYOND INFINITY
by Martyn Ford
Indie