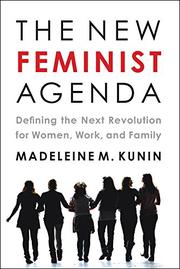 The former governor of Vermont takes the women’s movement to task for failing to push for crucial changes in family-oriented policies.

On the front line of the women’s movement in the 1970s and ’80s, Kunin (Professor at Large/Univ. of Vermont; Pearls, Politics, and Power: How Women Can Win and Lead, 2008, etc.) expresses her still-simmering anger at the lack of progress made in basic gender equity—e.g., U.S. Congress is still only made up of 17 percent women, and women only earn 77 cents for every dollar that men earn. Mostly, however, Kunin is deeply concerned about the lack of meaningful progress enacted for struggling parents and young children in the areas of maternity leave, affordable child care and early education, flexibility in the workplace and elder care. While the early feminists were locked on hot-button issues like abortion and violence, they disdained to push so-called middle-class issues like maternity leave. The result has been a disastrous “Social Darwinism” approach to the family agenda over the last few decades, and America now has the world’s highest teenage pregnancy rates. Kunin looks at comparative policies in the Nordic countries, which all have advanced work/family policies and strong gender equality but extremely high taxes; in France, which offers universal early daycare but has a big gender-equality gap; and in England, which has implemented a “right to request flexibility” feature for workers that might be a good match for the U.S. Some states, like California and Oklahoma, have recently passed promising family-friendly policies, though the author stresses that businesses must be converted to the far-reaching benefits. Kunin sounds the need to incorporate fathers in the push for these policies, in nurturing women leaders and mentors and in joining forces with labor unions, retirement groups and businesses.

WOMEN AND THE WORK/FAMILY DILEMMA
by Deborah J. Swiss
Nonfiction

WHEN EVERYTHING CHANGED
by Gail Collins
Nonfiction

WHAT GOVERNMENT CAN DO
by Benjamin I. Page
Nonfiction