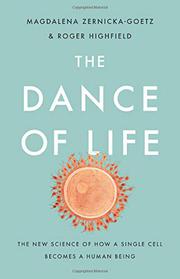 THE DANCE OF LIFE

The New Science of How a Single Cell Becomes a Human Being
by Magdalena Zernicka-Goetz & Roger Highfield
BUY NOW FROM
AMAZON
BARNES & NOBLE
LOCAL BOOKSELLER
GET WEEKLY BOOK RECOMMENDATIONS:

A foray into the developmental biology of individual cells in an embryo.

While Zernicka-Goetz (Biology and Bioengineering/Caltech) and co-author Highfield (The Science of Harry Potter: How Magic Really Works, 2002, etc.) discuss how the cells of early embryos arise, how they organize with such precision and direct their own development, and how they sense when something goes wrong, this is not a primer on embryology but rather an in-depth journey through the world of the research embryologist. Following the biology takes patience and focus for those not well versed in the science—“the mitochondrially targeted zinc-finger nuclease, or mitochondria-targeted transcription activator-like effector nucleases, enzymes that can be engineered to snip specific sequences of DNA, are used to recognize and then eliminate mutant mitochondrial DNA”—but the effort is repaid in spades. Readers engage with the whole process of fertilization as well as cellular specialization, cell cleavage, two-cell biases, and the developmental process. In her research, Zernicka-Goetz makes movies of fluorescently labeled cells “because they talk to each other with proteins and other molecular factors and respond to their surroundings.” We learn that cooperation allows specialization and promotes diversity, spurring the embryo to self-organize. We follow the “dance” as the embryo becomes a multilayered organism. There are also intriguing discussions of how a blastocyst’s three types of cells arise and how they interact to make something as complex as the human body. The story has a memoirlike atmosphere, especially when Zernicka-Goetz turns to episodes of her life. But she is never far from the science, as when she writes about her pregnancy and her son, who had chromosome irregularities, which became a topic of her research. Particularly beguiling is a chapter devoted to advances in creative biology—regenerative medicine, preimplantation testing, designer babies, embryo editing, genome editing—and all the attendant ethical concerns that surround them.

Meaty and entertaining, with the effort extended well worth the energy.

SUPERCOOPERATORS
by Martin A. Nowak
Nonfiction

AFTER DOLLY
by Ian Wilmut
Nonfiction

THE PRIVATE LIVES OF ALBERT EINSTEIN
by Roger Highfield
Nonfiction

THE ARROW OF TIME
by Peter Coveney
Newsletter sign-up