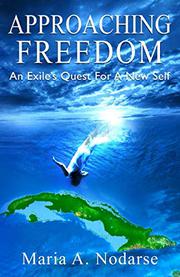 An Exile's Quest for a New Self
by Maria A. Nodarse
BUY NOW FROM
AMAZON
BARNES & NOBLE
LOCAL BOOKSELLER
GET WEEKLY BOOK RECOMMENDATIONS:

A Cuban political refugee recalls her arrival in 1960s America in this debut memoir.

Nodarse and her mother were chatting on their front porch in Havana when the family received a telegram saying that Loren, the author’s brother, had absconded with equipment from the Georgia Military Academy. He intended to join Fidel Castro’s rebellion against Cuban President Fulgencio Batista. As a 12-year-old, Nodarse had a sense that tensions were rising in Cuba, with exploding Molotov cocktails becoming a regular occurrence. With Havana “on the brink of open warfare,” the family spent Christmas 1958 in Mexico and on New Year’s Eve learned of Batista’s overthrow. Nodarse and her family returned to Havana, but when her father lost his job, they left Cuba for Miami, later relocating to New Jersey. The author struggled to assimilate, was marked as an outsider, and heard malicious questions such as “Did you wear shoes in Cuba?” Growing older, she attended Columbia University and, rebellious in nature, became a political activist. She also became fixated on her identity and the possibility of reconnecting with her homeland. Nodarse has a zesty narrative style, which is immediately endearing. On receiving the telegram about her brother, she notes that the “tall scrawny” delivery boy “could have punched me in the stomach. I’d seen enough World War II movies to know telegrams were bad news.” She also employs dialogue to great effect, weaving it seamlessly into the narrative. Here she recalls her first encounter with her future partner, Bernard: “ ‘Do I detect an accent?’ he asked as he draped his trench coat over his arm. It must have been the way I pronounced ‘Nodarse.’ ‘I’m Cuban,’ I said, with hauteur.” This passage also reflects the author’s keen eye for detail and elegant word choice. While well written, the memoir would have benefitted from more precise signposting regarding exact locations and dates—this information is communicated vaguely throughout, although this misstep does not detract greatly from the text. Nodarse’s story may not have the suspense and scope of similar works, such as Finding Mañana by Mirta Ojito, but it remains a valuable first-person account of a pivotal moment in Cuban history.

A stylish and eloquent examination of Cuban identity and outsiders.