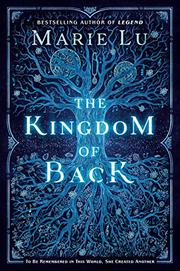 THE KINGDOM OF BACK

Lu (Rebel, 2019, etc.) interweaves 18th-century historical figures and events with a fantasy land called the Kingdom of Back, an alternate world actually invented and named by the real Mozart siblings, Nannerl and Woferl, where trees grow upside down and a prince and princess are missing. Hyacinth, a beautiful, shadowy boy, pale and blue-eyed, is the go-between who offers Nannerl figurative immortality in return for her help. As Nannerl craves her father’s attention and wishes to escape the inevitable anonymity that womanhood promises, she agrees. Over the next decade, she straddles both worlds, performing, composing, and navigating relationships with Woferl and her domineering father in one while battling supernatural foes for Hyacinth in the other. But as she grows, so do her doubts. Is Hyacinth the benevolent fairy he claims to be? Is success at her brother’s expense really what she wanted? Lu’s melding of history and fantasy is a clever idea, but the Kingdom of Back and its denizens feel like stock figures compiled from generic fairy tales in contrast to her portrayal of the real Mozarts’ lives, which is much more remarkable, emotional, and compelling than the fantasy land.

In the second installment of Marie Lu’s Young Elites series, The Rose Society, Adelina Amouteru’s heart has suffered at the hands of both family and friends, turning her down the bitter path of revenge. Now known and feared as the White Wolf, she and her sister flee Kenettra to find other Young Elites in the hopes of building her own army of allies. Her goal: to strike down the Inquisition Axis, the white-cloaked soldiers who nearly killed her. But Adelina is no heroine. Her powers, fed only by fear and hate, have started to grow beyond her control. She does not trust her newfound Elite friends. Teren Santoro, leader of the Inquisition, wants her dead. And her former friends, Raffaele and the Dagger Society, want to stop her thirst for vengeance. Adelina struggles to cling to the good within her. But how can someone be good, when her very existence depends on darkness? “The direction of this trilogy's conclusion is left refreshingly difficult to predict,” our reviewer writes. View video >