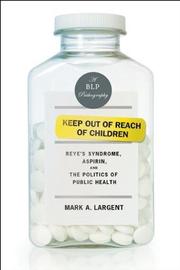 KEEP OUT OF REACH OF CHILDREN

A well-researched history of Reye’s syndrome that explores how science, medicine and politics interact.

Largent (Associate Dean/Lyman Briggs Coll. at Michigan State Univ.; Vaccine: The Debate in Modern America, 2012), a childhood survivor of Reye’s syndrome and currently a historian of science, tackles a malady that is still not well-understood. Named for the Australian physician who described it in the 1950s, the syndrome was at first thought to be caused by aflatoxins, then by ingredients in a pesticide, and then, in 1980, by aspirin. Largent relates each of these stories of searches for a cause, focusing mainly on aspirin. There is a brief chapter on therapies developed to treat Reye’s, which was often fatal or left survivors with severe disabilities, but the author’s primary concern is not treatment approaches but rather the long controversy over its link to aspirin. As Largent examines the dispute over whether to require warning labels on bottles of aspirin, he also scrutinizes the actions and interactions—some might say the machinations—of pharmaceutical companies, consumer rights groups, epidemiologists, public health officials, courts and the U.S. Congress. In 1985, the Department of Health and Human Services ordered that warnings about Reye’s syndrome appear on all bottles of aspirin sold in the United States, giving advocates of this measure the opportunity to create a narrative about the triumph of science over big pharma. However, as Largent points out, uncertainty remains. The incidence of Reye’s declined sharply in the 1980s and then virtually disappeared, leaving scientists without cases to investigate to determine whether aspirin was indeed the culprit. The author’s take-home message is that despite all the earnest efforts, sometimes there are no final answers.

A revealing work that validates the statement that watching policy being made is like watching sausage being made—not a sight for the squeamish.